My Chicago River Oar Board® Adventure by Deanne McCarthy

My Chicago River Oar Board® Adventure by Deanne McCarthy

I have rowed my Oar Board® for about a year now on the rivers and lakes near my hometown of Pasadena, Newfoundland in Canada. And, I’ve had some cool adventures. I have also managed to get my confidence up and my row stroke down.

Earlier this year, I got a call from my friend Diana Lesieur, the sales manager at Oar Board®, and she asked for my help to do some Oar Board® rowing demos at the Outside Experience Show in Chicago. I checked the weather in Chicago and it was a LOT warmer there than anywhere in Newfoundland. I loved the thought of rowing in the warm summer water of Lake Michigan and hanging with the Oar Board® crew and so I quickly agreed to go.

The flight out west left me overnighting in Toronto. I was so excited I could not even sleep. I finally arrived in Chicago the next morning and Diana and another old friend, Sarah, met me at the airport. 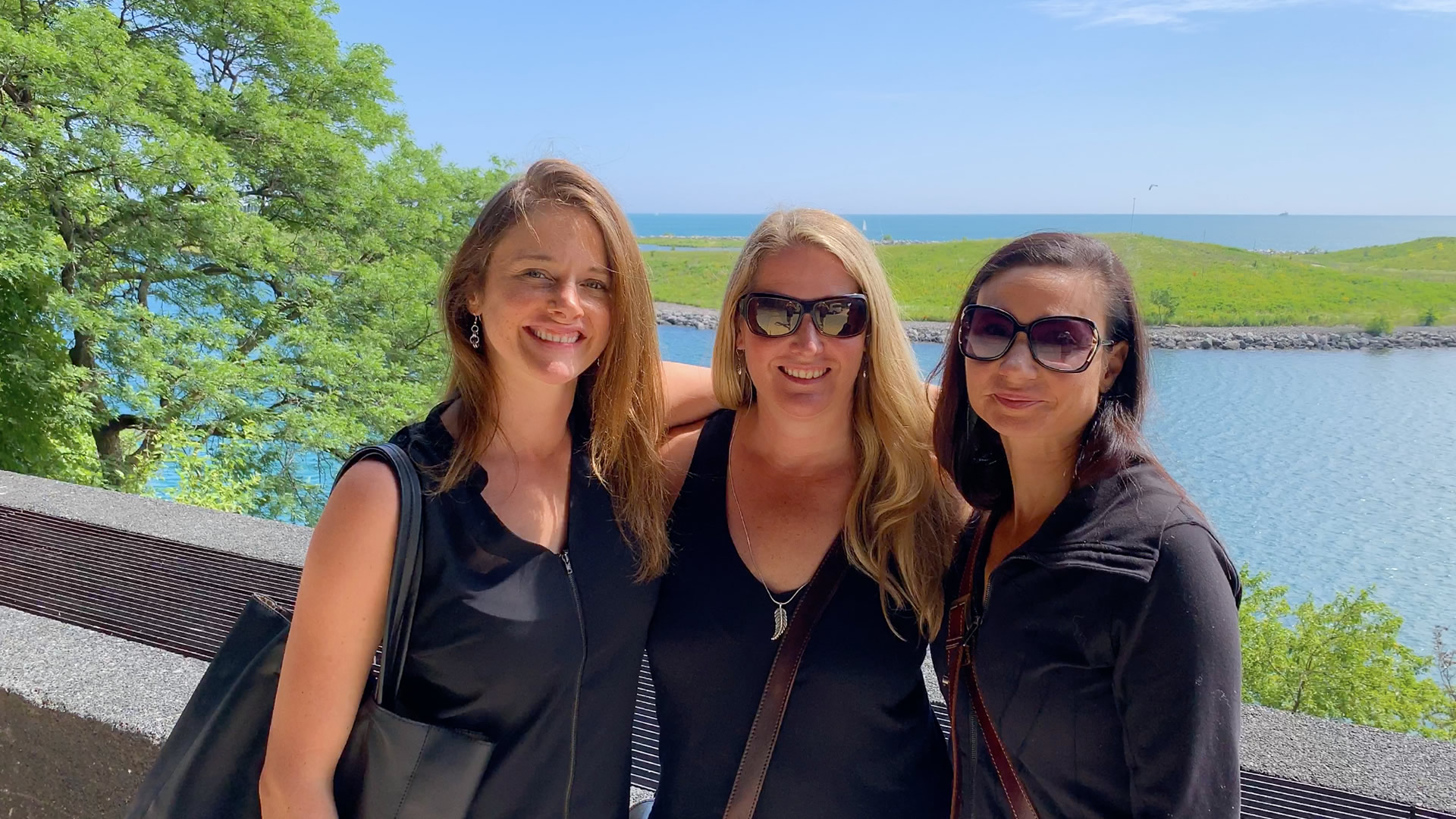 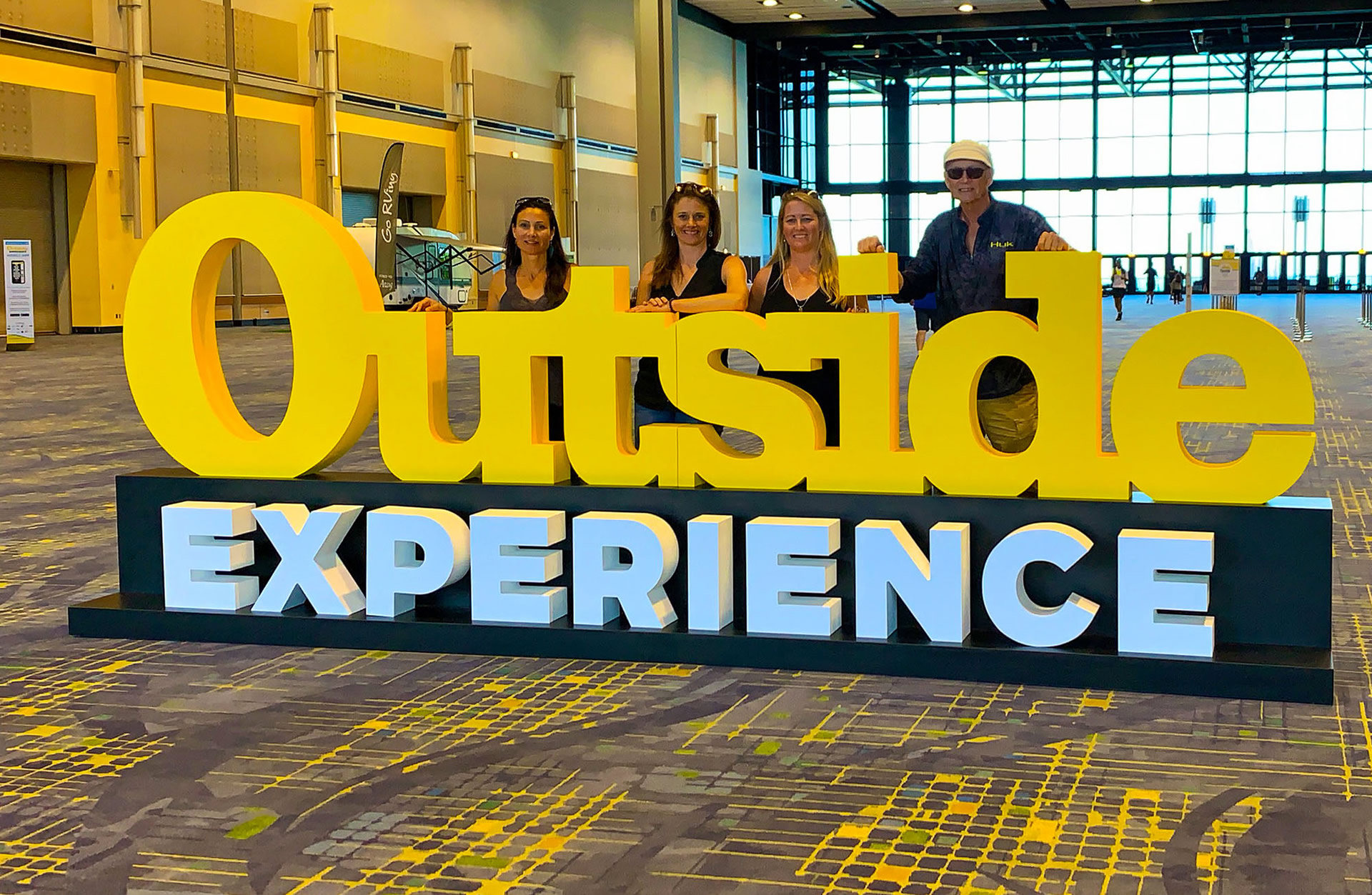 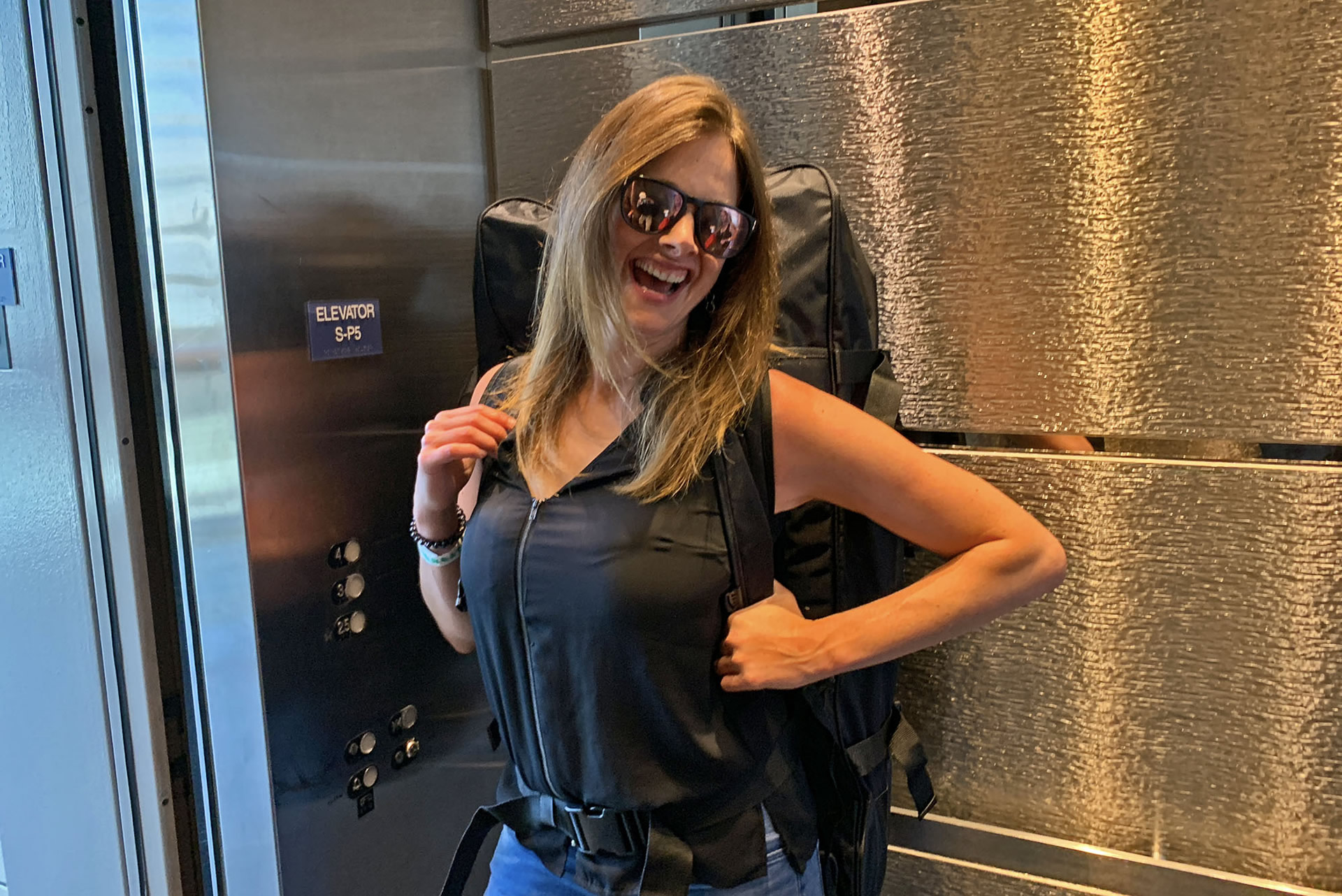 We spent the first day exploring the city, particularly the waterfront where live bands were playing and a holiday mood was in full swing. As we walked along we came to the mouth of the Chicago River that runs right through the center of the city. Harold Aune, the designer of the Oar Board® met up with us and we all thought how cool it would be to row the Chicago River with our Oar Board®. Close by we found a kayak rental and after inquiring they said we could launch our boards off their dock the next afternoon.

The next day, after setting up our display at the Outside Magazine show at the McCormick center, we went downtown towards the Chicago River. This time we were driving, not walking, and getting our rental car and all of the gear to the kayak rental was difficult as the roads were stacked 3 levels high in that area. Finding our way, driving down to the launch site, took a major amount of time. We circled around and around getting lost in the maze a few times but finally, we arrived at the launch site. 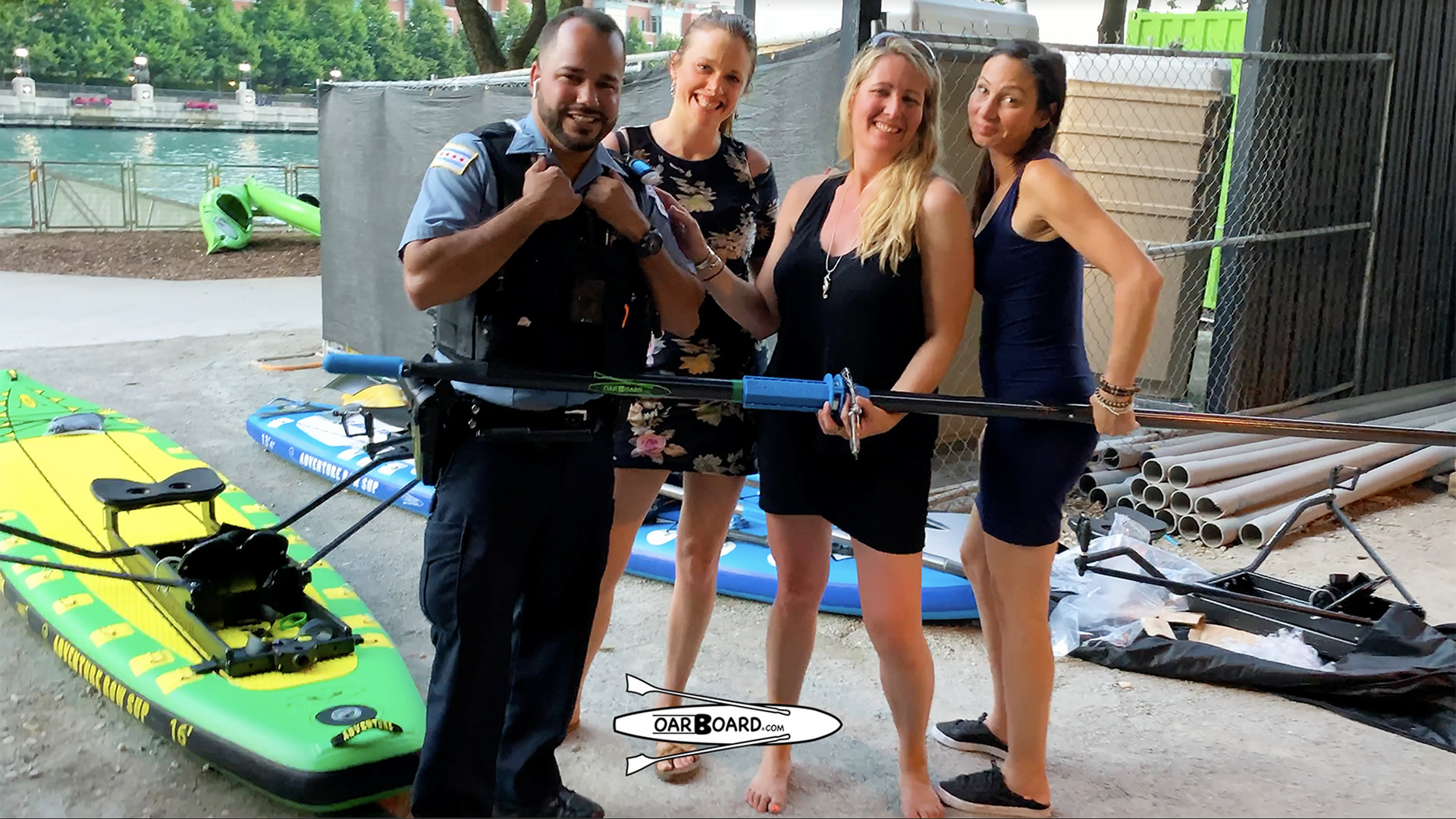 As we were pumping up the boards a friendly Chicago City Police Officer came over to see what we were doing.

We got the SUP boards pumped up and the Oar Boards strapped on as twilight rapidly approached. I rowed an Adventure Row SUP 13’4” Combo and Diana and Sarah together were rowing an Adventure Row SUP 16’ (Double) Combo. We borrowed some running lights from the kayak rental as by now the sun was going down. 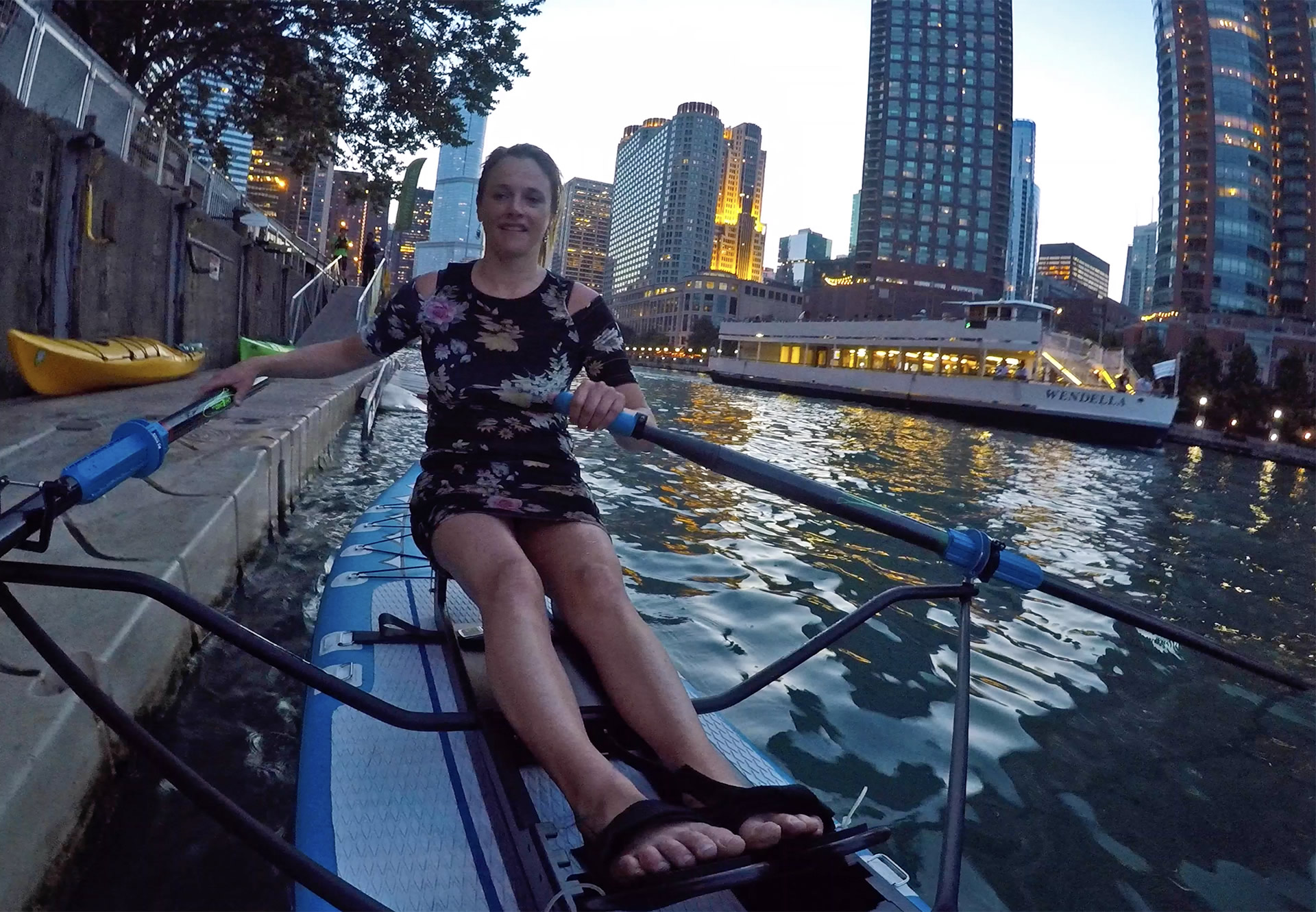 The sky was now a beautiful deep blue between the giant buildings that towered overhead. Dozens of tour boats filled with chattering tourists were also on the river and this meant a sharp lookout had to be kept to stay out of their way.

As we rowed upriver thousands of lights were coming on in all the buildings and added to the surreal effect of rowing right through the center of a major city.

After a couple of miles, we turned around and rowed back down the river to the launch site. The feeling of rowing in the dark, even though it was pretty well lit up, was truly amazing. 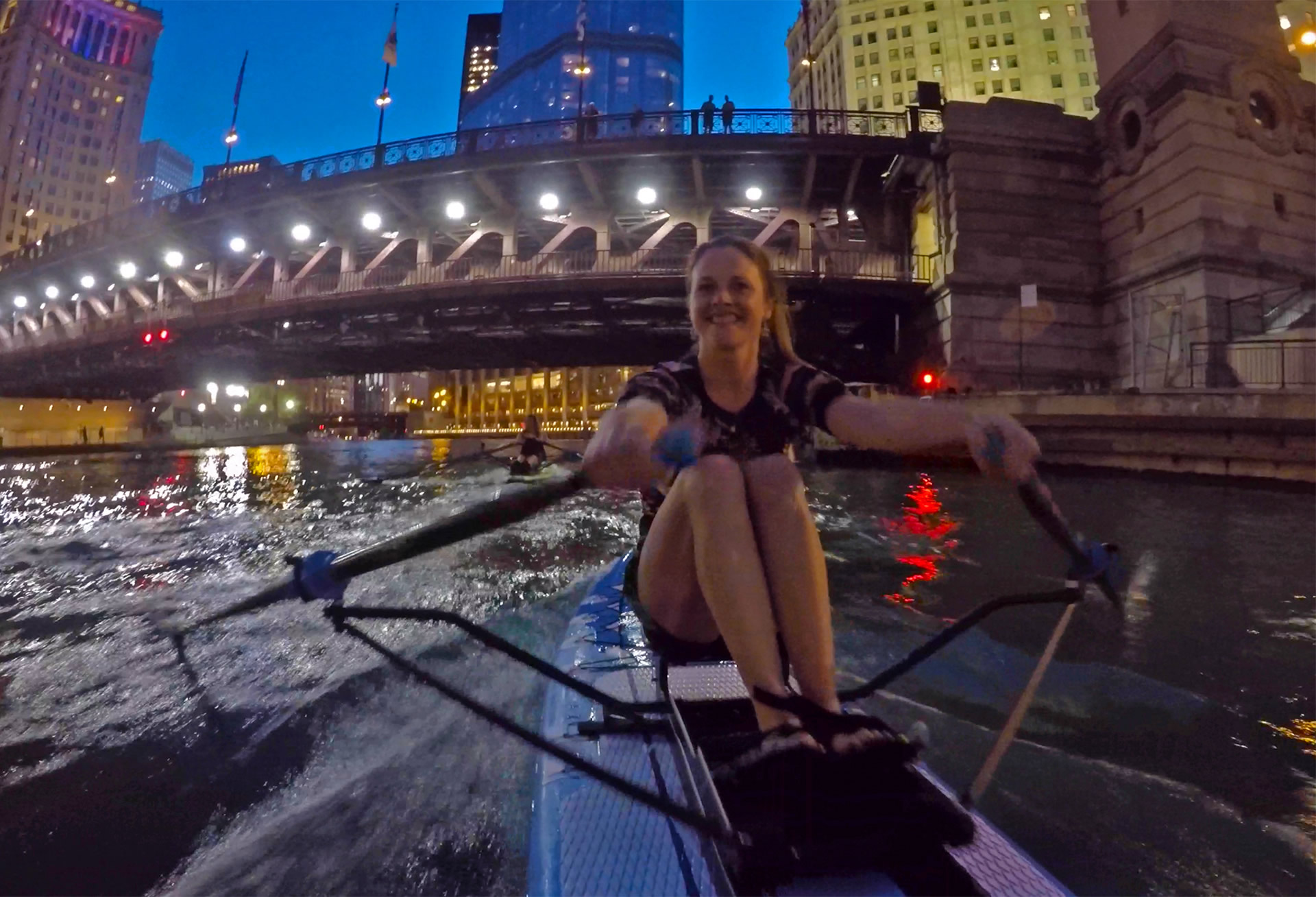 We got back to the dock, deflated and packed up the two paddle boards and the Oar Board® rowers in the dim light cast from all the buildings before loading up the car and then setting off to locate some tasty Chicago-style food.