The Oar Board® Rower Travel Package converts any hard or inflatable paddle board 10’ or longer into a performance rowing boat.

Fits into its own Wheely Bag along with the two-part carbon fiber sculling oars.

Includes a custom inflatable paddle board and everything else needed to row or paddle.

Why the Oar Board® Rows So Well

On a sliding seat, the rower’s full body weight moving back and forth on the tracks causes a boat to slow down on the glide or recovery part of the row stroke. This does not occur with the Oar Board® with its fixed seat and sliding rigger. Maintaining steady trim as the hull passes through the complete duration of the row stroke is also what makes it possible to smoothly row with the much shorter paddle board type of hull. 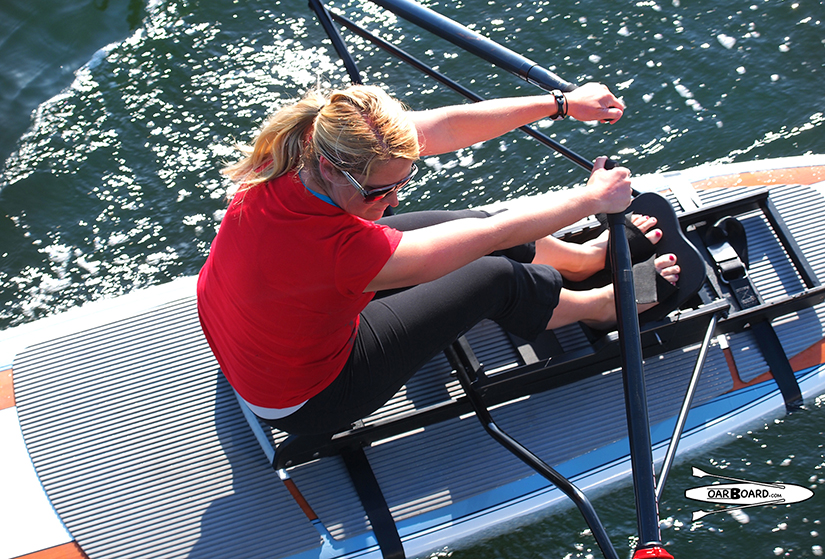 The History of the
Oar Board®

The sliding rigger rowing system is not a recent invention. An early patent was filed for a similar rowing unit way back in 1905 however the German Olympic rowing challenge of 1985 saw a revival of the technology. Thorough development and testing was conducted by the German Olympic challenger team.

When it was found that the sliding rigger system was substantially faster when used on a racing shell, the Olympic governing body banned the German sliding rigger technology from being used in the 1988 Olympic challenge on the grounds of an unfair speed advantage. Sliding rigger rowing systems disappeared from the rowing scene until now, with the development of the Oar Board®.

Chat with Diana live or message her via the Oar Board website.

Sign up to the Oar Board mailing list to find out about exclusive offers, special events, stories, the latest adventure videos, and useful rowing and paddling tips delivered to your personal Inbox.